Paulig's history begins in 1876, when Gustav Paulig, an immigrant from Germany, started a business of his own. The food industry was still in its infancy. The vast majority of foods were sold in the form of unprocessed raw ingredients. Gustav Paulig started with importing and trading colonial goods, such as salt, coffee, spices, flour, port and cognac.

From the beginning Paulig has been in Helsinki: first on Fabianinkatu, then on Pohjoisesplanadi, in the 1890s on Eteläranta and on after the turn of the century in Katajanokka.

Gustav Paulig rapid became a distinguished and visionary businessman. He understood the essence of a brand and designed the first company logo in the 1880s. Consequently the Paulig coffee packages were marked with the P-insignia as a guarantee of high quality that was of significant value to the founder of the company and a legacy for future generations. After Gustav died in 1907, his widow, Bertha Paulig, ran the business.

In 1950 Paulig unveiled the Paula girl. Eduard's son Henrik Paulig brought the idea of Paula as the visible spirit of Paulig with him from America. Dressed in the national costume of the Sääksmäki district and depicted pouring coffee from a copper pan, Paula became a familiar sight in many connections. Three years after the Paula Girl's success, a new craze made its breakthrough: collectors' cards, which attracted many junior motorists to Paulig coffee.

The old business premises in the Katajanokka district of Helsinki were getting cramped. The roasting plant and packaging plant moved into modern, new facilities in Vuosaari in 1968. The then President of Finland, Urho Kekkonen, was present at the opening ceremony.

The 1990s were a decade of internationalisation and urban construction for Paulig. In Vuosaari, a whole new daughter city was rising, together with shopping centres and commercial buildings. As the Baltic countries opened up in the wake of the Soviet Union’s disintegration, Paulig became one of the first to enter into cooperation with old trading partners. The company’s roastery was completed in the Saue district of Tallinn in 1993. Paulig had returned Estonia after an absence of more than 50 years. The centres of trade with Russia were St Petersburg and Moscow, where Paulig established sales offices of its own.

Paulig opens the new coffee roastery in Tver region in Russia. The production of the new, modern roastery is directed to Russia’s and CIS markets. Paulig is already one of the leading marketers of coffee in Russia. The new production plant has an important role both from the competitiveness and customer service point of view. 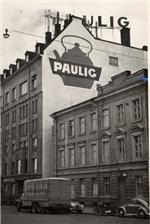 In 1904 Paulig expanded its business from wholesale into the food industry. Its coffee roastery, the first in the Nordic countries, was started in a warehouse building in the Katajanokka district of Helsinki. In the USA, John Arbuckle had developed the technique of industrial coffee roasting in the late 19th century. Until then, coffee had only been sold in green form and it had to be roasted at home. At first most of the coffee supplied by Paulig was also green. Only in 1926 did sales of roasted coffee exceed those of green coffee in Finland.

At first, Paulig supplied roasted coffee to shops in five-kilo packages. An enquiry from a shopkeeper in Mariehamn in 1924 led to Paulig becoming the first on the market to bring out coffee in consumer packages. The first packages were 250-gram and 500-gram paper-packs wrapped and sealed by hand. The following year, the roasting plant got its first packaging machinery, and coffee was soon available also in 100-gram packs.

In honour of the roastery’s 25th anniversary in 1929, Paulig launched its first coffee brands - the Juhla and Presidentti blends, which were the forerunners of today's top brands Juhla Mokka and Presidentti. Prior to the named brands, Paulig had a number of coffee blends identified only by numbers. Two years later, in 1931, ready-ground coffee appeared on the shop shelves. At the same time, the date was printed on the Paulig coffee packages to indicate the freshness of the product. The latter was an innovation not seen before anywhere in Europe.

Eduard Paulig, the son of Gustav and Bertha, served as the company's Managing Director from 1919 until 1947. It was in his time that Paulig grew into a force to be reckoned with in the food industry.

Henrik Paulig came back from abroad and brought with him the idea of professional services for the consumer, and in 1971 the Paula service was opened. The Paula service not only provided advice and tips for consumers on the phone and by mail but also produced exciting recipe booklets and held product-related how-to evenings. The Paula Girl toured shops and cafés giving advice.

In 1980, professionals got a seat of learning of their own when Paulig opened the Coffee Institute to foster coffee culture. The roastery in Vuosaari was renovated again and new roasting and packaging technologies came into service at the same time. The company’s internationalisation began in the UK market, where a coffee company acquired by Paulig – Appleton Machin & Smiles Ltd – was renamed Paulig U.K. Ltd.

A site for a new roastery in the business park in Helsinki´s new seaport was purchased in January 2006. That autumn, the final decisions on significant investments for the company were taken, and the topping-out was celebrated in summer 2008. The new roastery was inaugurated in January 2010.

In March 2012 a new common corporate identity, based on a solid platform of values and guidelines, is launched. A new corporate logotype is introduced together with our new core message and tagline – Exploring Great Taste – which underpin the fact that everything we do relates to our passion for rich coffee, good food and irresistible flavours. Our corporate identity ties us together as a group – our brands remain the same towards customers and consumers!

Our values:
Stay Curious
Strive for Excellence
Grow Together